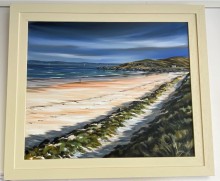 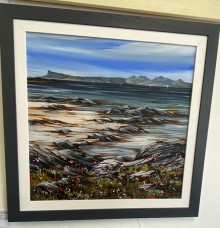 Stuart Herd is inspired by the varied and dramatically changing landscape of his country – Scotland.

He was born in Scotland in 1971, and after growing up in England and briefly attending Amersham College of Art he started a career in photography in the South East whilst regularly travelling north to Scotland to explore and capture the landscapes.

His photographic career was varied, from Studio and Commercial photography to Press and Lab work around the UK. During this time his love of travel was born and he combined this by working as a photographer onboard cruiseships, aswell as ’character making’ independent solo trips worldwide.

In the mid 90’s he returned to Scotland and whilst living in Edinburgh he started producing highly detailed Pen & Ink cityscapes and scenes. Galleries started showing his work and his art career had taken over. At this time he also started his Stadium portfolio, which now showcases over 40 sporting arenas across Europe.

After working as an Art Auctioneer in all-inclusive resorts in Jamaica for a year, he stayed on the island for another 2 years, earning a living Picture Framing, painting and drawing. He received acclaim from the public and critics alike for his Pen & Ink exhibitions on the island.

Looking for a new direction, in 2002 he again returned to Scotland and his painting took precedence. He started exhibiting in Argyll galleries while working as a Picture Framer, but within a few years he was working full time on his paintings.

In 2007 he opened The Art Studio, due to his growing popularity he felt he needed an outlet for people to meet him and view his work. This enabled him to combine his Picture Framing business on this site. Since opening, his work has become increasingly sought after by buyers worldwide.

In 2011 Stuart had a major accident, after moving into his new family home, he was building a wardrobe from a certain Swedish furniture supplier when the screwdriver he was using slipped, it punctured his eye and to cut a long story short…after numerous operations,he is now blind in one eye…after a year of various operations the decision was taken to remove the eye (he has a fake eye) However, he was straight back in the studio and now almost 2 years later (updated July 2013) he is back producing the same, if not more (he is adamant he is more ’focused’ – pun intended) of detailed work he was prior ’the accident’.
During his many hospital stays, he realized he needed a plan B (he wasnt sure how many more operations he’d have in the future) as he was loosing ’painting time’….so he set his mind to opening a Gallery in Tarbert – The Harbour Gallery opened on March 17th 2012 and has quickly developed a reputation for selling a wide range of Local Original Art aswell as ORIGINAL Scottish Shipping timetables and West Coast Memorabilia…..from the 1920’s onwards, all professionally mounted or framed. He is very proud of the Gallery and has found a niche in the market, steering away from the mass produced prints sold across Scotland. The Harbour Gallery was one of ’The Top Ten Places to see in Argyll’ published in ’The Scottish Field’ May 2012.

Stuart now sells his work through over 20 Galleries around the UK, thus opening up his work to new buyers and collectors. He has had numerous exhibitions across Scotland and aswell as his commitment to supply galleries and his Studio with new paintings he undertakes commissions of varying sizes to private and corporate clients.

We have a large selection of Stuart Herd’s Original work, please get in touch for more information.